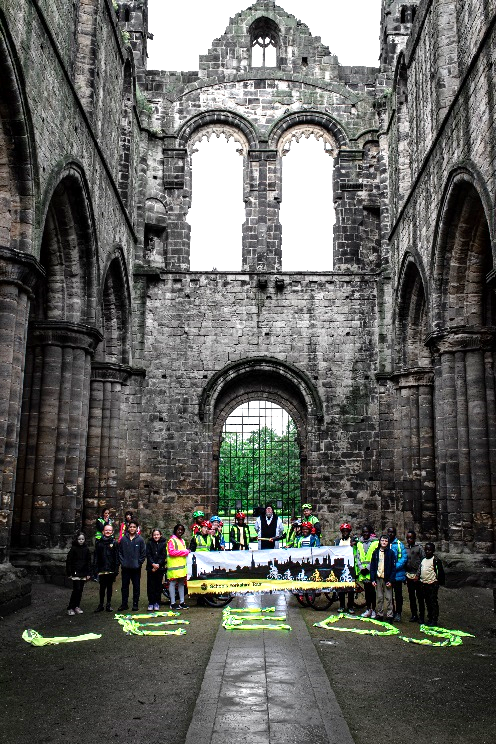 Well done to all the schools that have taken part in the Schools Yorkshire Tour 2019. The cycle baton relay aimed at primary, secondary and SEND schools across Yorkshire was originally  created by Leeds City Council to encourage our children and young people to cycle to school whilst improving their cycling skills.

14 Schools from Leeds took part in The Schools Yorkshire Tour this year. The tour started at York Minister on 10th June to celebrate national Bike Week and made its way through eleven local authorities including; North Yorkshire, Leeds, Bradford, Calderdale, Kirklees, Wakefield, Barnsley, Sheffield and Rotherham before ultimately finishing in Doncaster in the Sir Nigel Gresley Square on the 2nd July 2019.

As the cyclists from Richmond Hill cruised into the very wet magnificent ruins of Kirkstall Abbey, they were greeted not just by cheering friends from school, but also by a medieval monk! ‘Brother Bernard’ who was made up in a full Cistercian monk outfit to help them pass the baton on to the next group of cyclists.

On 2nd July the relay ended in style with a celebration event held at CAST in Doncaster to celebrate the finale of the Schools Yorkshire Tour, and saw the safe arrival of the baton into Doncaster.

Thanks to all who took part and those that helped organise a fantastic event!